One of the things that also truly disturbed me in my research was discovering the real origins of polygamy and how Joseph Smith really practiced it.

The Church and apologists now attempt to justify these polyandrous marriages by theorizing that they probably didn’t include sexual relations and thus were “eternal” or “dynastic” sealings only. How is not having sex with a living man’s wife on earth only to take her away from him in the eternities to be one of your [Joseph] forty wives any better or any less immoral?

...shortly after Heber's return from England, he was introduced to the doctrine of plural marriage directly through a startling test—a sacrifice that shook his very being and challenged his faith to the ultimate. He had already sacrificed homes, possessions, friends, relatives, all worldly rewards, peace, and tranquility for the Restoration. Nothing was left to place on the altar save his life, his children, and his wife. Then came the Abrahamic test. Joseph demanded for himself what to Heber was the unthinkable, his Vilate. Totally crushed spiritually and emotionally, Heber touched neither food nor water for three days and three nights and continually sought confirmation and comfort from God. On the evening of the third day, some kind of assurance came, and Heber took Vilate to the upper room of Joseph's store on Water Street. The Prophet wept at this act of faith, devotion, and obedience. Joseph had never intended to take Vilate. It was all a test.

If Joseph’s polygamous/polyandrous marriages are innocuous “dynastic sealings” meant for the afterlife, as the Church and apologists are now theorizing, and Joseph wanted to “dynastically link” himself to the Kimball family, why was Apostle Heber C. Kimball so troubled by Joseph’s command for his wife that he “touched neither food nor water for three days and three nights”?

Joseph took 14-year-old Helen Mar Kimball’s hand in marriage after his disturbing Abrahamic test on her father, Heber, while promising Helen and her family eternal salvation and exaltation if she accepted:

Just previous to my father’s starting upon his last mission but one, to the Eastern States, he taught me the principle of Celestial marriage, and having a great desire to be connected with the Prophet Joseph, he offered me to him; this I afterwards learned from the Prophet’s own mouth. My father had but one Ewe lamb, but willingly laid her upon the alter: how cruel this seemed to the mother whose heartstrings were already stretched until they were ready to snap asunder, for he had taken Sarah Noon to wife and she thought she had made sufficient sacrifice, but the Lord required more. I will pass over the temptations which I had during the twenty four hours after my father introduced to me the principle and asked me if I would be sealed to Joseph, who came next morning and with my parents I heard him teach and explain the principle of Celestial marriage - after which he said to me, ‘If you will take this step, it will ensure your eternal salvation and exaltation and that of your father’s household and all of your kindred.’
This promise was so great that I willingly gave myself to purchase so glorious a reward. None but God and angels could see my mother’s bleeding heart – when Joseph asked her if she was willing, she replied, ‘If Helen is willing, I have nothing more to say.’ She had witnessed the sufferings of others, who were older and who better understood the step they were taking, and to see her child, who had scarcely seen her fifteenth summer, following in the same thorny path, in her mind she saw the misery which was as sure to come as the sun was to rise and set; but it was all hidden from me.

Why all the agony and anguish if this was an innocuous “Dynastic Linking” and sealing for the afterlife? Why did it seem “cruel” to Vilate, “whose heartstrings were already stretched”?

If some of these marriages were non-sexual “dynastic” “eternal” sealings only, as theorized by the Church and apologists, why would Joseph need to be sealed to a mother and daughter set? The mother would be sealed to the daughter and would become part of Joseph’s afterlife family through the sealing to her mother.

Further, Joseph died without being sealed to his children or to his parents. If a primary motive of these “sealings” was to be connected in the afterlife, as claimed by the Church and apologists, what does it say about Joseph’s priorities and motives to be sealed to a non-related and already married woman (Patty Sessions) and her 23-year-old already married daughter (Sylvia Sessions) than it was to be sealed to his own parents and to his own children?

Some of the marriages to these women included promises by Joseph of eternal life to the girls and their families, or threats that he (Joseph) was going to be slain by an angel with a drawn sword if the girls didn’t marry him.

Many members do not realize that there is a set of very specific and bizarre rules outlined in Doctrine & Covenants 132 (still in LDS canon despite President Hinckley publicly stating that polygamy is not doctrinal) on how polygamy is to be practiced. It is the kind of revelation you would expect from the likes of Warren Jeffs to his FLDS followers.

The only form of polygamy permitted by D&C 132 is a union with a virgin after first giving the opportunity to the first wife to consent to the marriage. If the first wife doesn’t consent, the husband is exempt and may still take an additional wife, but the first wife must at least have the opportunity to consent. In case the first wife doesn’t consent, she will be “destroyed.” Also, the new wife must be a virgin before the marriage and be completely monogamous after the marriage or she will be destroyed (D&C 132:41 & 63). It is interesting that the only prerequisite that is mentioned for the man is that he must desire another wife: “if any man espouse a virgin, and desire to espouse another...” It does not say that the man must get a specific revelation from the living prophet, although many members today assume that this is how polygamy was practiced.

D&C 132 is unequivocal on the point that polygamy is permitted only “to multiply and replenish the earth” and “bear the souls of men.” This would be consistent with the Book of Mormon prohibition on polygamy except in the case where God commands it to “raise up seed.”

# Again, contrary to D&C 132, the following summarizes how polygamy was actually practiced by Joseph Smith

William McLellin reported a conversation he had with Emma Smith in 1847, which account 38 is accepted by both LDS and non-LDS historians, describing how Emma discovered her husband’s affair with Fanny Alger:

One night she [Emma] missed Joseph and Fanny Alger. She went to the barn and saw him and Fanny in the barn together alone. She looked through a crack and saw the transaction!!! She told me this story too was verily true.

D&C 132:63 very clearly states that the only purpose of polygamy is to “multiply and replenish the earth” and “bear the souls of men.” Why did Joseph marry women who were already married? These women were obviously not virgins, which violated D&C 132:61. Zina Huntington had been married seven and a half months and was about six months pregnant with her first husband’s baby at the time she married Joseph; clearly she didn’t need any more help to “bear the souls of men.”

How about the consent of the first wife, which receives so much attention in D&C 132? Emma was unaware of most of Joseph’s plural marriages, at least until after the fact, which violated D&C 132.

The secrecy of the marriages and the private and public denials by Joseph Smith are not congruent with honest behavior. Emma was not informed of most of these marriages until after the fact. The Saints did not know what was going on behind the scenes as polygamy did not become common knowledge until 1852 when Brigham Young revealed it in Utah. Joseph Smith did everything he could to keep the practice secret from the Church and the public. In fact, Joseph’s desire to keep this part of his life a secret is what ultimately contributed to his death when he ordered the destruction of the Nauvoo Expositor, which dared publicly expose his private behavior in June 1844. This event initiated a chain of events that ultimately led to his death at the Carthage jail.

Consider the following denial made by Joseph Smith to Latter-day Saints in Nauvoo in May 1844 – a mere few weeks before his death:

...What a thing it is for a man to be accused of committing adultery, and having seven wives, when I can only find one. I am the same man, and as innocent as I was fourteen years ago; and I can prove them all perjurers.

It is a matter of historical fact that Joseph had secretly taken over 30 plural wives by May 1844 when he made the above denial that he was ever a polygamist.

Joseph Smith was already a polygamist when these revelations were introduced into the 1835 edition of the Doctrine & Covenants and Joseph publicly taught that the doctrine of the Church was monogamy. Nevertheless, Joseph continued secretly marrying multiple women and girls as these revelations/scriptures remained in force.

In an attempt to influence and abate public rumors of his secret polygamy, Joseph asked 31 witnesses to sign an affidavit published in the LDS October 1, 1842 Times and Seasons stating that Joseph did not practice polygamy. Pointing to the above-mentioned D&C 101:4 scripture, these witnesses claimed the following:

“...we know of no other rule or system of marriage than the one published from the Book of Doctrine and Covenants.”

The problem with this affidavit is that it was signed by several people who were secret polygamists or who knew that Joseph was a polygamist at the time they signed the affidavit. In fact, Eliza R. Snow, one of the signers of this affidavit, was Joseph Smith’s plural wife. Joseph and Eliza had been married 3 months earlier, on June 29, 1842. Two Apostles and future prophets, John Taylor and Wilford Woodruff, were also aware of Joseph’s polygamy behind the scenes when they signed the affidavit. Another signer, Bishop Whitney, had personally married his daughter Sarah Ann Whitney to Joseph as a plural wife a few months earlier on July 27, 1842. Whitney’s wife and Sarah’s mother Elizabeth (also a signer) witnessed the ceremony.

What does it say about Joseph Smith and his character to include his plural wife and associates – who knew about his secret polygamy/polyandry – to lie and perjure in a sworn public affidavit that Joseph was not a polygamist?

Now, does the fact that Joseph Smith practiced polygamy and polyandry while denying and lying to Emma, the Saints, and the world over the course of 10+ years of his life prove that he was a false prophet? That the Church is false? No, it doesn’t.

What it does prove, however, is that Joseph Smith’s pattern of behavior or modus operandi for a period of at least 10 years of his adult life was to keep secrets, to be deceptive, and to be dishonest – both privately and publicly.

It’s when you take this snapshot of Joseph’s character and start looking into the Book of Abraham, the Kinderhook Plates, the Book of Mormon, the multiple First Vision accounts, Priesthood Restoration, and so on that you begin to see a very disturbing pattern and picture. 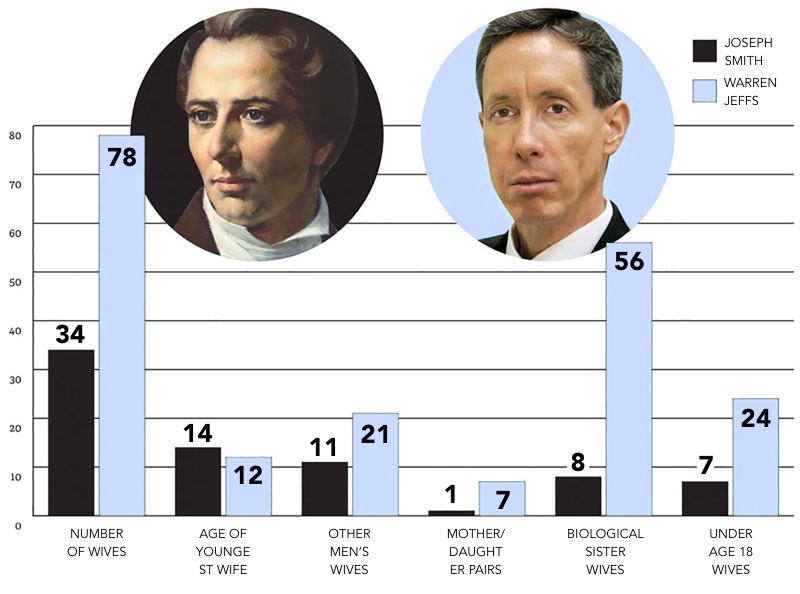 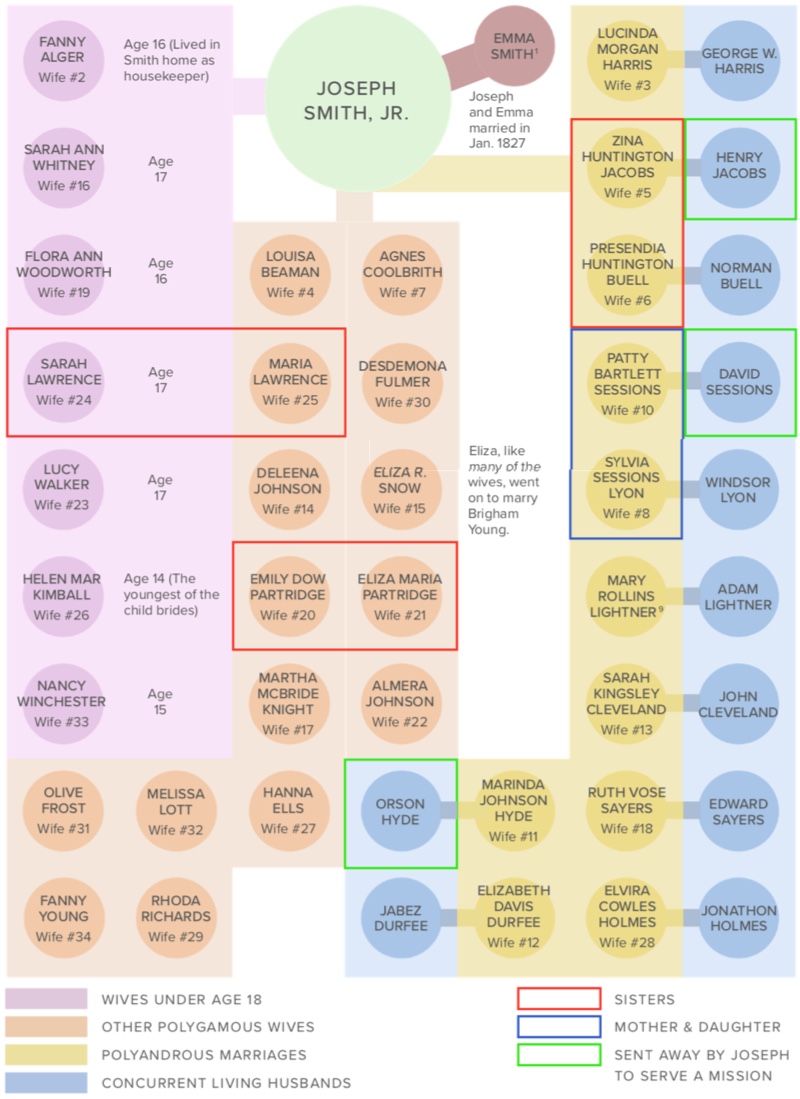